In Daniel Quinn’s book, “Beyond Civilization”, Richard Buckminster Fuller says, “You never change things by fighting the existing reality. To change something, build a new model that makes the existing model obsolete”. This approach to systems change is what drives us to create solutions for bicycle and mobility infrastructure that help continue shifting the dominant transportation paradigm from a carbon burning system to a carbohydrate burning system. Since day one, we have strived to become leaders in bicycle and mobility infrastructure through innovation, smart design and by providing reliable solutions to real world problems. Our High Performance Pump Head is one of the latest physical manifestations of this approach to design and product development.

It may sound like grandiose hyperbole to apply Mr. Fuller’s quote to the context of a simple pump head, but the pump head has traditionally been the Achilles heel to any public-use bicycle pump. Over the last 5 years the field of companies offering a public-use bicycle pump has exploded all over the world and they’re offering everything from foot-operated pumps, rotary pumps and traditional hand-operated pumps. Each company touts their competitive advantages whether it’s their price point or improved ergonomic functionality.However, few companies dared to unravel the design crux that is the pump head until we dreamed up the idea of a serviceable, reliable and undeniable competition slayer of a pump head. Our chosen working title for this challenge was the “Air Chuck Norris” because anything you design for public use and abuse must be able to take a punch (or 20). 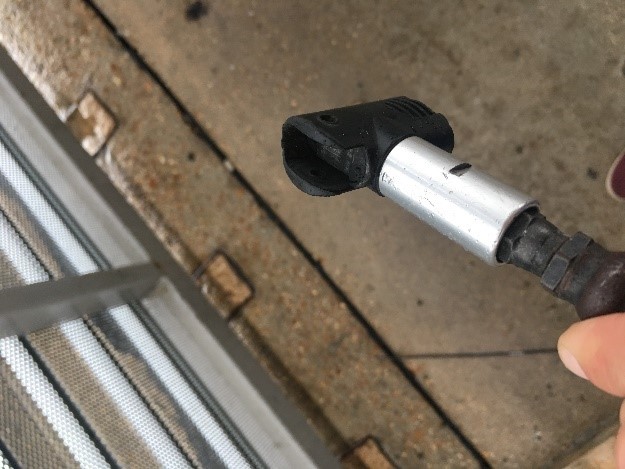 An all too common occurrence
When we released our High Security Outdoor Pumps in 2014, we brought to market one of (if not the most) durable and reliable public-use bicycle pumps in the world. The feedback we received from distribution partners and customers alike validated this bold claim.

However, we knew all along that the air chuck (aka pump head) that we spec’d on these pumps was not a best-in-class product. We used the best available product at the time that didn’t cost a fortune and we provided a free back-up air chuck with every pump sold as we knew it would need replacement every few months. During the 5 years that we used this off-the-shelf air chuck, we learned all about its failure points. Like a prize fighter who studies their opponent’s vulnerabilities, we made the Air Chuck Norris a force to be reckoned with.

Some of the obvious short comings of off-the-shelf air chucks include:

Our proprietary design not only addresses all these weak points, but we also made ours serviceable. The face, or part of the pump head that interfaces with the innertube valve, deals with a lot of abrasion from public use. We decided to make ours out of stainless steel for enhanced durability and it’s removable with a T10 security torx bit to make seal replacement easy. This means that you can replace the most wearable part of our pump head for about the same cost as a cup of coffee and extend the life of the pump head for months of future use.

Replacing the seals is cheap, easy and extends the life of the pump head.

Tire inflation is the most common bicycle maintenance required on a bike so the pump head better work! We wanted a pump head that could be rebuilt and last for years instead of months. No more throw-away pump heads for us or our customers. We provide rebuild instructions on our website and the replacement seals themselves cost as much as a cup of coffee.

As soon as we received prototypes of the new pump head, we shipped off samples to some of the toughest testing grounds that we knew of to see how they would do. From Melbourne, Australia to East Lansing, MI, to London, England, we collected data and watched with careful eyes how our new and improved pump heads met the challenge or failed.

Shortly after the official release of the High Performance Pump Head (HPPH), we started getting phone calls and emails about them. Not from people complaining about the change but from other companies making public-use bicycle pumps. They wanted to use the HPPH on their own product. While we were flattered by the offer, we had to pass on the opportunities since the HPPH was designed for use with our inflation systems and is part of what makes our pumps the best in the world. That didn’t stop the industrious among them; one such company acquired the HPPH and some of our hoses via an indirect source and retrofitted some of their own pumps that had failed in the field. This kind of passive-aggressive validation really spoke to our Midwestern sensibilities and we couldn’t be prouder.

When it comes to developing innovative solutions to real-world problems, just listen and pay attention, especially to your customers and distribution partners. Many of our best design ideas were informed by feedback that we received from these stakeholders. We received A LOT of feedback on how the old plastic air chuck could be improved and we took it all to heart. We hope you love the Air Chuck Norris (aka: High Performance Pump Head) as much as we do!